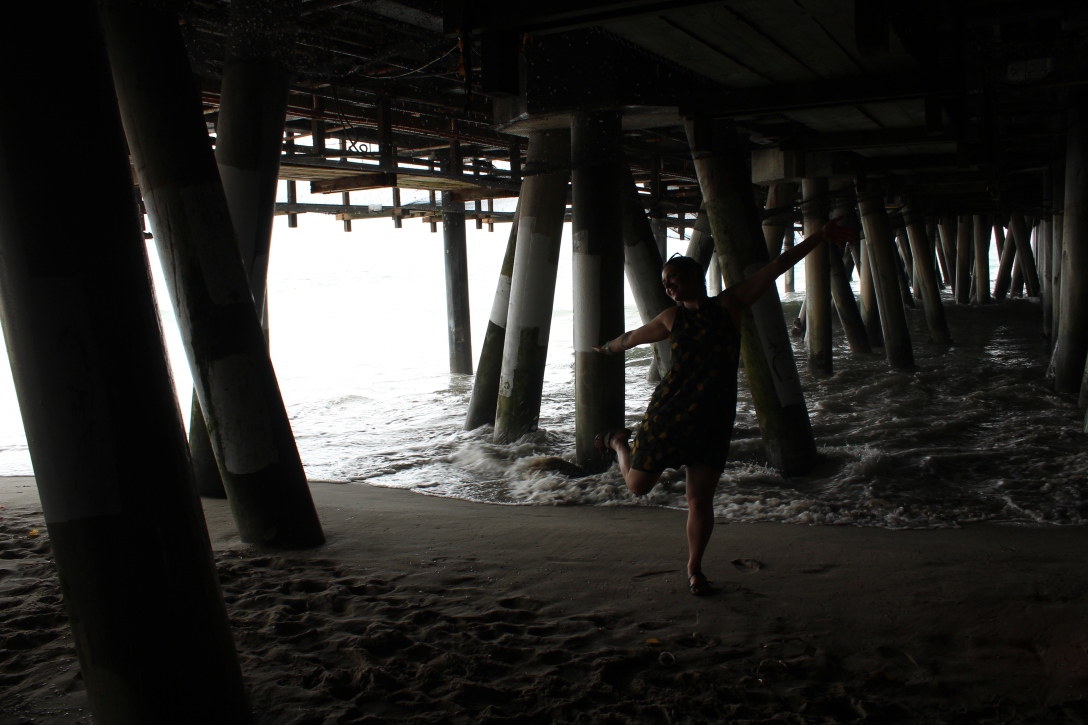 Over the summer I had the pleasure of visiting Los Angeles (a small part of it) with my sister, for my 30th birthday.

We took many (increasingly silly) photos.

It got me thinking about travel and what it means to be a visitor for a day (or two, or six, or 30) in another country. It’s kind of like putting on someone else’s jacket. It may fit; it may be too large, or too small; it may chafe in some places or feel comforting in others, and the assortment of things you find in the pockets (which may be many or few and far flung or in the usual places) could affect you in any number of ways–entertain you; bore you; challenge you; concern you; soothe you; intrigue you.

It was enough of a culture shock for me when I moved across Canada six years ago that I thought sometimes I might as well have moved to a different continent as halfway across. It forced me to see myself in a new light. At home I was surrounded by an infinite feedback loop of friends and family who knew me well enough to tolerate my quirks, or sometimes even indulge them. I had amassed a solid friend group of readers; geeks and nerds cut from the same cloth as me. Not quite literati, but with a cohesion to our tastes that never strayed too far from the common love of studying the arts and history.

Clearly, not much has changed.

In some ways, though, it has. The first coat I bought for my new life out west where the temperature sometimes dips to -50°C (not just overnight) felt as uncomfortable and strange to me as if I had put on a stranger’s coat by mistake. That coat, one of the first items I purchased before I moved away, was a garment so different from anything I’d ever owned. For one thing, the weather where I grew up never reached such depths of frigidity. For another, it was a $350 coat–the most I’d ever spent on a coat and likely would again. It made the far-off and somewhat ridiculous notion that I would ever do anything so foolhardy as to move 3600 kilometers away from where I was born and grew up and went to school a reality. It was someone else’s coat, but I was committing to becoming that someone else when I brought it home with me and packed it in my suitcase. It was a serious, grown-up investment in my future. No take-backsies.

The culture shock of the move was antithetical to my time in LA. California is notoriously liberal; the lush clime of the west coast fosters as much growth in the arts and independently run cafés as it does the palms and jacaranda trees.

I’m pretty sure these are plumeria, don’t @ me.

The place I moved to was cold and without much local plant life, let alone nightlife. Social groups ran according to the denomination of your faith, and the province had voted consistently Conservative (pro guns, against gays) for the last two decades. I felt unmoored from my group; adrift without the loop of common interests and feedback to push me back into place. I missed it, and I miss it to this day, but without it I was forced to think about who I was without anybody else. And that pushed me further, into asking who I wanted to be.

It’s been six years and I have added to my collection of coats, and will continue to as the weather changes. Nut no matter where I am or where I travel now, those first experiences making a new home for myself in a part of the world where I had never been have allowed me to grow into the kind of person who tells the people I live with who I am, rather than letting the people and place decide who I ought to be.

Experiencing the local scenery and culture is paramount to having a good trip anywhere. A good trip often ends with the knowledge that you’re leaving a new place and going back to the comfort and familiarity at home. Over the years, the compass needle pointing me home has moved from east to west. Now when the needle points to home, it’s pointing straight back at me.

Author of short stories, poems and novels. Half of Listen 2 Me Podcast. Local Writer's Guild member. Provider of kibbles for two corgis. View all posts by Renee Meloche